I've been a blog slacker lately.

In part because I've been trying to clean and clear up scraps.

*sigh* I don't feel like I've been completely successful with either.  My walking foot is acting up, so I've ordered another one.  I haven't touched my Crazy/Twisted section yet.

My folks are coming for a visit next week so this week will be filled with frantic cleaning.  I'd much rather be sewing.  But I'm going to have to hide most of my sewing stuff.  Is it wrong that I've started a list of projects I want to sew at Stash Bash?  Is a list of ten too much?

I'm dancing a bit more, but I've also not been stellar in my eating habits.
On the up side, I'm going to be subbing for my teacher in a few weeks.  That's kind of exciting.  Plus, now I can't stop dancing or leading a class for an hour and fifteen will be embarrassing.

Ok...enough kvetching.  My goal for March.
So, I'm keeping it low key.  I've got my Retro Rubies almost done.  It just needs binding and burying threads.  I kind of hate this quilt.  I'm finding that some of my long standing FAL projects are there just because I wasn't having fun doing them.  I really didn't have fun with this one.  For some reason, the piecing was a struggle (and I've done curves before and liked them).  Because I didn't have any extra, I had to use some of the wonkier bits.  When I was quilting it, I shattered two needles.  (Turns out that was probably when the walking foot started failing.)  The thread kept breaking.  I just wanted to get it done.  I've cut the binding, but I haven't even sewn the pieces together or ironed it.  Y'all, that's not like me.  So, I'm putting this on the March list so I'm not tempting to bury it and give up on it.

I don't have a more recent pic on flickr.  So, this one will have to do. 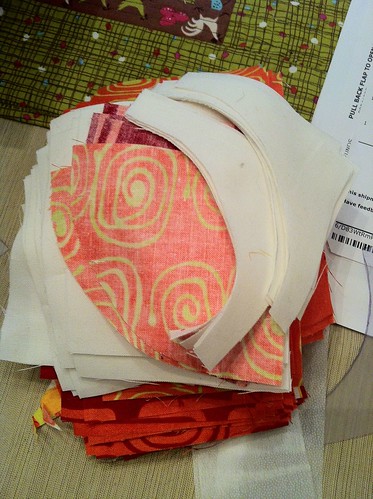 If you follow me on IG, you've seen the progress.  Hopefully I'll get it done in the next week.  Then, I just have to figure out what to do with it because I am not feeling a strong desire to keep this one.  (Also odd for me.)