I'm trying to whittle away at play related projects.  I'm supposed to load the set in Sat, but since school was canceled right in the middle of the HS musical, the theatre schedule has become a tad insane.
I'm hoping I can load in by Sun.  Otherwise, I have even less time in the theatre with the set and a cast of 30.  Nope.  Not panicking.  Too tired to panic. 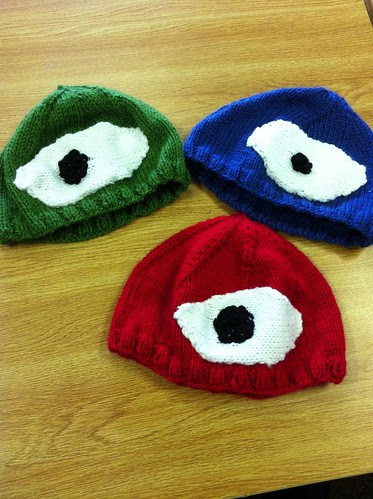 Husband thinks I should make and sell cyclops hats.
I also have a wolf hat all done but sewing on the ears.

My snow days have been spent sewing and sleeping.  I have some kind of an ick.  Feeling like it's a virus, maybe.  If the fever comes back, I'll go get checked for strep.  My 1/2 nap yesterday turned into 2 hours.

Also, telecommuting hubs means I can't sew in the room with the TV.  Which was not all that bad since I had some hand sewing to do. 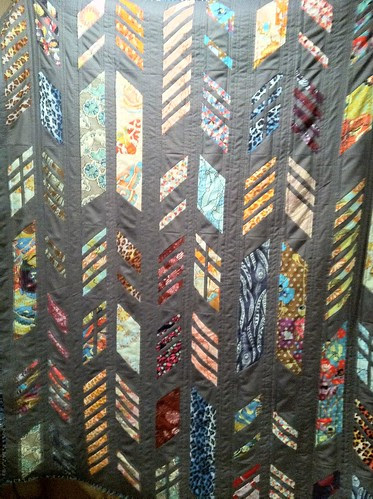 This was my Jan ALYOF goal.  DONE!!!
O.M.G.  one of my all time favorites.  I backed it in a fleece blanket.  It's so so soft.  Kind of med weight but warm.  It's even more lovely now that it's been washed, but here's the pre-wash picture.

I need the weather to be nicer to do an official photoshoot.

Luckily, I'll have TWO quilts to shoot.  I also finished my Economy block quilt, which my husband is now calling S. Fl Trailer Park.  It's kind of awesome.  I have discovered a renewed love of leopard.  Honestly, it didn't really ever leave.  (I'm pretty sure I had a pink and silver leopard print scarf in the 80s.)  I really wanted a leopard flannel for the back, but struck out.  I used a crazy fuschia tree pattern instead.  Photos of that one when it's out of the wash.  (Where it is now.)  I hand quilted around the first two layers of the block with perle on each block.

I've got a third quilt I need to finish and baste this weekend.  It's for a friend going in to surgery next Fri.  I'd like to give it to him before he checks in for surgery.  Nothing like a deadline.  Geesh.

I'm headed to the musical tonight.  Time to regroup, but happy to see some of my old favorites on stage again.