I am WAY behind (though my behind may be smaller because I Zumba'd today...but that's another matter). I am behind.

Mostly because I tried the Sew Out Loud block.
Um...it made me feel dumb.

I have some dyspraxia/dyslexic tendencies and, apparently, have issues with paper piecing.
Know what is sucko? Trying to seam rip when you are trying not to rip off paper so you can redo it.

First error: I forgot the edging and did it purple instead of the dark grey. Part of the problem was the low level of toner on my printer.

Many Many other errors: I'd sew on a piece and it wouldn't end up where I thought it would be. So I'd have to rip and start again.
Anyway...it's finally done, but it's the ONLY thing I got done today. 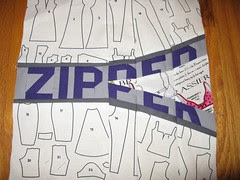 Let me just say that much chocolate was consumed because I poked a hole in the R, apparently, during seam ripping. Any one know if I can patch it with some heat and bond or stitchwitchery?

I don't know if I can handle trying the rest of the QAL if the rest are this hard.
My to do list is awfully long still....

My Sparkle got quilted yesterday. 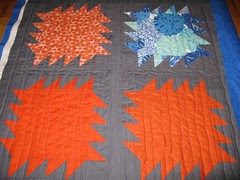 I'm pondering making the binding match the back. Otherwise, a solid tangerine is a possibility. Any opinions?
Posted by Ella at 8:20 PM 6 comments