Okay.  Let me start with the fact that I'm still processing this, that I still have epic loads of swag, projects and purchases in bags and/or piles in my Sewing Room and various locations around the house.  (Ugh.  Which reminds me how much I need to clean....ignoring ignoring.)

Just as a quick knee update.  My MRI is slated for Wed.  Thank you, Allegory, for making my day brighter with coffee yesterday.

Okay (what is with me and saying ok today?), let me start off by saying I have never before been to Salt Lake City, UT.  It's a weird mix of flat and mountains.  Next time, I really want to explore more.  I, honestly, pretty much stuck to the hotel save for a meal or two and the mixer Friday night. My leg wasn't making me feel uber-explory and the time change wore me out more than I anticipated.

Words of advice to East Coasters that go/General Words of advice:
*BRING LOTS OF SNACKS.   I kept crapping out because I let my blood sugar get too low relative to when I normally eat, which reduced me to unfocused ADD/rambling idiot phase, rendering me useless in terms of absorbing some of the gems thrown at me.  (Hint:  Schedule the classes you REALLY need to pay attention for in the period right after breakfast or right after lunch.)
*Bring an extra suitcase.  Seriously, the quantity of swag was insane.  I had to check my carryon and was only able to drag everything back because of the Mood bag we were given, which I think I could fit our Cocker Spaniel and the cat into.
*Caffeinate.  I think I was quieter at times and less social than I could have been.  I ran the gamut from introvert to extrovert (more introvert when I am tired or feeling overwhelmed) and I didn't say hi to a few people I really wanted to because I was overwhelmed.  It's A LOT of people.  I kind of felt like a dork at times and bounced into wall flower mode....which meant I missed out on some cool hang out times.
*Get a roommate.  I didn't.  Which felt, at times, kind of lonely.  I forget that I live with someone and have animals, so I'm used to company.
*Let go of finishing things.  Most of the classes I was in weren't long enough to actually finish some of the projects.  Which resulted me in going all OCD and panicking/rushing.  Which generally meant I screwed stuff up.  I'm going to have to take apart the Ship Shape Tote and redo a handle.  I sliced a piece of fabric off a foundation paper piecing star segment...and didn't bring extra fabric.

There were super cool folks there.  Some were people whose blogs I've followed or folks I'd emailed/chatted with before...and some of the people I had the best conversations with there were just random folks I met up with at the airport or sat down next to on the Shop Hop.  Unfortunately, because of my aforementioned geeky lameness, I don't have pictures of many of them...or many pictures period.
Here's what I have:

The shop hop had a cool Halloween village at the 2nd shop we stopped at: 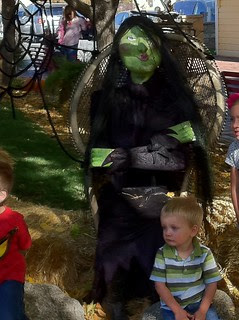 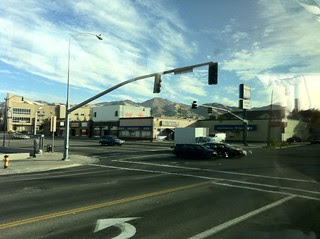 Partial Swag just from checking in: 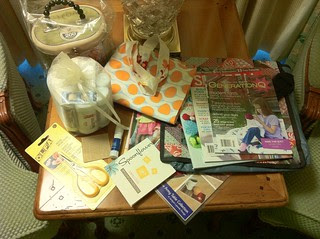 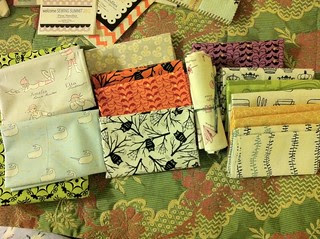 Some (this is only some) of the stuff I won/was gifted: 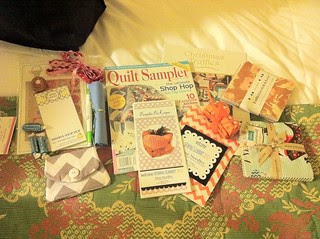 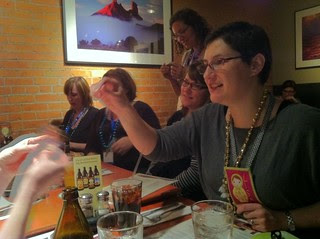 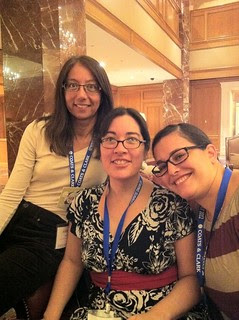 me (blinking) with Rachael of Imaginegnats: 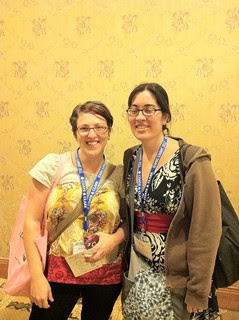 Hanging out at the Mixer: 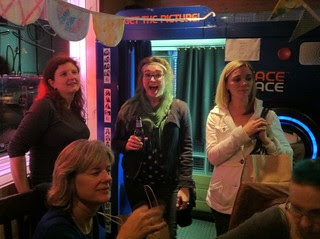 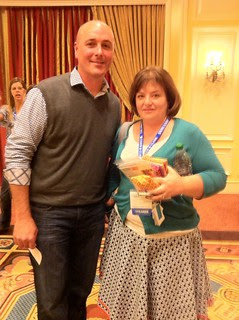 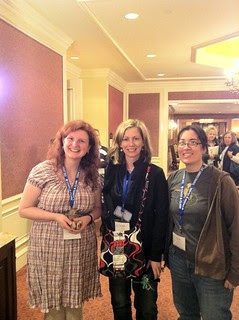 More stuff that came out of my clown car like carryon bag: 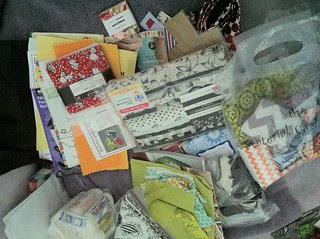 An informal embroidery class from Rachael (I want a flat Rachael to carry with me around town).
That's not being a stalker, people, that's being a fangirl. 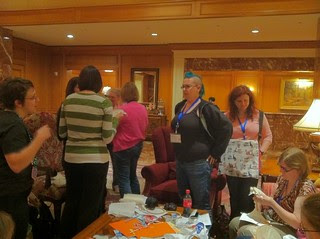 Evidence I cannot sew in a straight line when I am tired: 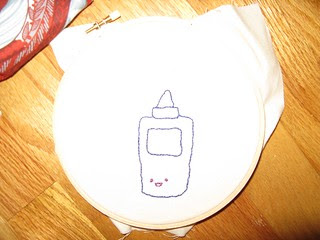 The shipshape tote I finished (but have to take apart to sew it correctly): 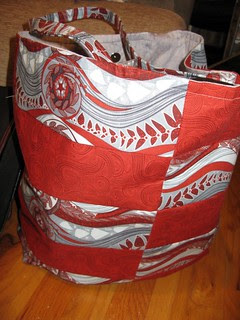 My frame purse, which I did finish in Kelly's class: 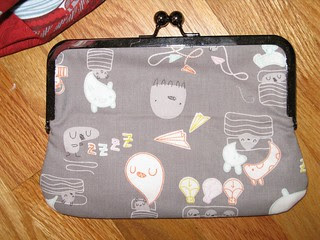 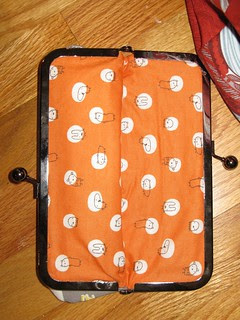 Yes, I will shake my ass for Anna Maria Horner.  Tula, too, if you have it. 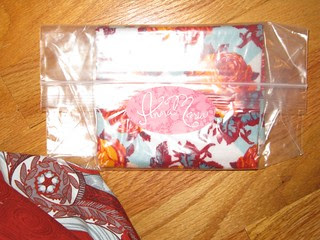 That's it......I wish I had a photo of everyone I met, Karen's bag (which was gorgeous in a block she designed), other people's projects, Darcy (who shared a serger with me), the fireside chats, the setting....I don't think I'll be able to go next year (wedding bills, y'all), but I'm glad I got to go at least once...

I promise to try to return to my crafty, overachiever self once I get over my knee anxiety.
Posted by Ella at 12:27 PM 10 comments