Ok, so there is a really cool linkup happening over here: 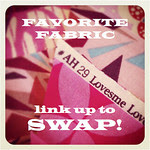 You should totally join in.

I'm hoping for some of my favorite fabrics to pop up and for someone to be willing swap or trade or such.

Those of you who follow me know two folks pop up in my work fairly consistently.

First, I'm a sucker for Tula.  Her Prince Charming line is the first one I collected as a quilter.
That frog still kills me.  As does her octopus.  However, I'm hunting for some oldies...ones that came out way before I discovered them.

Anyone got any that wants to swap me?

My second favorite designer is probably Lizzy House.  I love her lines (and am dying for Catnap to come out already).  I may have an octopus dress still planned for Salt Water but I am DYING to make a vintage-y rockabilly dress out of Lizzy's kitties.  Oh, and her foxes in Outfoxed in the orange.  Still in love.

The ducks from Red Letter Day (I missed out) and Outfoxed foxes in the orange.

I'm putting it out there into the universe.  Give me a holler if you're interested.
Posted by Ella at 9:54 AM 8 comments